A Quest To Understand Adoption, Attachment, and Suicide 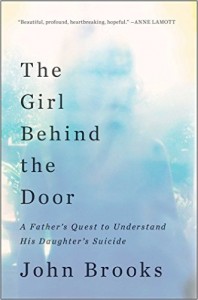 The Girl Behind the Door, A Father’s Quest to Understand His Daughter’s Suicide, by John Brooks, provides a profound look into adoption, teenage suicide, and attachment issues.

“When John and Erika’s daughter Casey jumped off of the Golden Gate Bridge in 2008, John began to unravel a heartbreaking truth—Casey had been in pain since birth, living in an Orphanage in Poland until she was adopted at 14 months.”

John spent many years after Casey’s suicide trying to understand what lead to her taking her life. He learned so much—the things he didn’t know, the mistakes he made, and the help he didn’t get from the professional community. He asks, “What did everyone miss? What could have been done differently?”

When you tune in to hear John’s story, you’ll understand more about the struggles children who are adopted face, and the heartache any parent feels when a child’s behavior is out of control, and challenging to understand.

John Brooks, a former senior financial executive in the broadcast and media industry, has turned to writing, mental health activism, and volunteer work with teenagers in Marin County. He maintains a blog: parentingandattachment.com to share his experience and educate other adoptive families about parenting and therapy techniques unique to children with attachment disorders.

Nancy Newton Verrier, M.A., is a psychotherapist in private practice in Lafayette, CA, specializing in adoption issues. She is an internationally acclaimed lextureer on the effects of early childhood trauma and deprivation caused by the premature separation of mother and child. She is the author of, Coming Home to Self and The Primal Wound: Understanding the Adopted Child. http://nancyverrier.com/