Is it possible to use psychoactive substances in a clinical setting for anxiety or depression related to a terminal illness, or to treat

Psilocybin (active ingredient in “magic mushrooms”)  is a powerful medicine that is being researched in therapeutic settings. Researches caution against recreational use of psilocybin because of potential adverse psychological reactions.  New research suggests it has great potential as a treatment for severe anxiety caused by a serious illness,  or terminal diagnosis. Other psychoactive substances are being researched for PTSD, depression, and drug abuse.

Adam Strauss is a writer and performer based in New York City. His show, The Mushroom Cure, is playing at the Marsh Theatre in San F 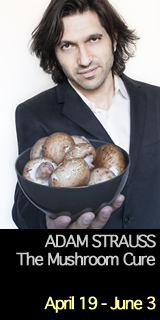 rancisco for its West Coast Premiere. His show is inspired by a scientific study showing that hallucinogenic mushrooms may cure obsessive-compulsive disorder (OCD). Adam won the Leffe Craft Your Character Storytelling Competition and the New York Fringe Festival’s Overall Excellence Award for Solo Performance. He is also a stand-up comedian who performs throughout the US and the UK. Adam received his BA in psychology from Brown University. For more information about the show go to https://themarsh.org

Alicia Danforth, Ph.D. has worked in clinical research with psychedelic medicines since 2004 at the Los Angeles Biomedical Research Institute at the Harbor-UCLA Medical Center. She has collaborated with Dr. Charles Grob on pilot studies of psilocybin-assisted therapy for existential anxiety reactive to late-stage cancer and MDMA-assisted therapy for social anxiety in autistic adults. She currently is a licensed psychologist in private practice in the Silicon Valley and is beginning new research on psilocybin-assisted therapy for long-term survivors of HIV in San Francisco. Alicia co-taught the first graduate course for clinicians and researchers in training, entitled, “Psychedelics: Theory, Research, and Clinical Applications.”